Highlights of our Unifor agreement with Ford Canada members

We have some exciting news to share with you and all TMMC team members.

Unifor has just negotiated a historic agreement with Ford Motor Company that not only makes significant improvements to wages, benefits and workers’ health and safety, but also provides substantial investments and product commitments that help secure the future of Canada’s auto industry.

For Toyota team members, this deal is worth taking note of and should raise serious questions about your workplace conditions. 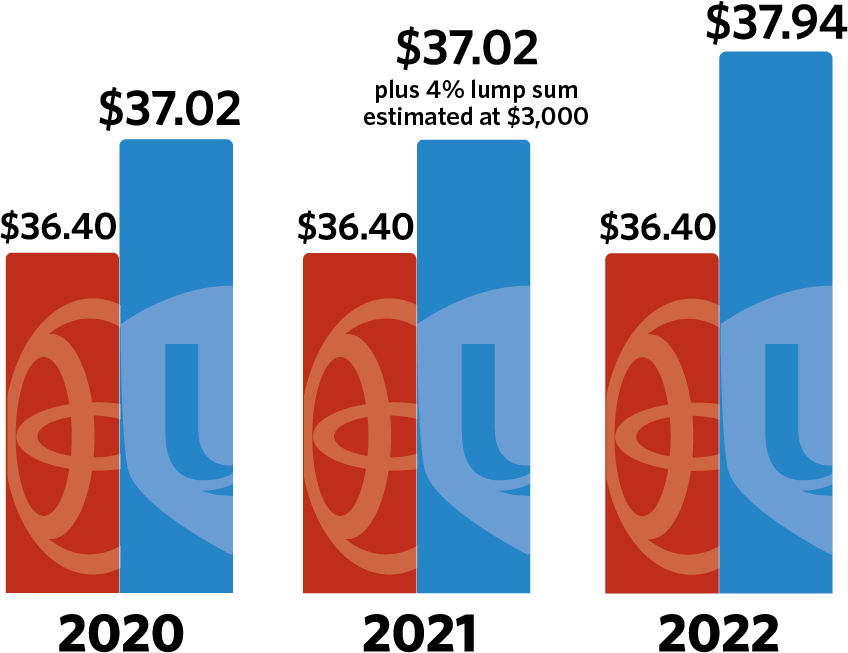 *Unifor wages include negotiated increases and cost of living adjustment

The three-year deal includes wage increases totalling 5%, $11,250 in guaranteed bonuses and inflation protection payments, a 4% lump sum payment in year 2, a special skilled trades wage adjustment of $0.76 per hour (which is over and above negotiated base rate increases), compared to unpredictable wage increases and bonuses for TMMC team members based on Key Performance Indicators. Unifor autoworkers earn more as a result of the collective bargaining process.

Keeping workers safe on the job during the pandemic

Union representation allows workers to better protect the health and safety of everyone in our auto plants. Unifor and Ford work collaboratively through Master and Joint Health and Safety Committees. This arrangement has allowed workers to maintain rigorous standards and constant vigilance throughout the COVID-19 pandemic. That has, thankfully, meant not a single active case of COVID-19 at any Detroit Three facility in Canada.

Through dedication, collaboration and innovation, both Unifor and Ford jointly reaffirmed the role of the workplace health and safety representatives and the need to further their skills to prevent injuries and illnesses. Under this agreement, JHSC members will receive enhanced training on industrial hygiene and its provincial regulations, permissible exposure limits, hierarchy of controls, effective communication of sampling results and more.

Ford workers also negotiated a significantly improved New Hire Program that shortens the wage progression down to just 8 years (full rate at 8th year anniversary). The base percentages in the grid have been improved at every step, and exceed wages at Toyota. For example, an employee with 8 years of seniority at the D3 will receive the full rate of pay, including cost-of-living adjustments, the Unifor Legal Services Plan, tuition assistance for dependent children along with new health benefit contributions made by the employer, among other benefits.

Under this deal, Temporary Part-Time workers also benefit from contract gains but are explicitly prevented from eroding full-time work. This is very different from D3 operations in the United States as well as at TMMC. We know that at TMMC, part-time and temporary roles are used as a pathway to full-time jobs. But in Unifor workplaces, part-time temporary work is limited, and often to post-secondary students. Under this agreement TPTs will receive a $500 bonus upon ratification and a pay rate adjusted to 65% of the prevailing rate, and TPT wage adjustments are in line with all negotiated general wage increases.

The union and company have agreed to transform the Oakville Assembly Complex into a battery electric vehicle assembly facility with an investment commitment of approximately $1.8 billion from the company as well as pending supports from government. This is a historic and significant investment commitment that was only made possible through the collective bargaining process. The strength of the agreement with Ford is linked to the strength of our union and our ability to work collaboratively with all parties to create a shared vision for the industry as a whole.

The fact is that until now, Canada had not seen one dime of the more than $300 billion in global investments announced for electric vehicle production.

But with this deal, Canada is back in the game.

One unique feature of the deal is that battery assembly work will also be done at the Oakville Assembly Complex, ensuring that future work is expanded in both vehicle and component assembly. Unionized workers are uniquely positioned to attract big-ticket investments in the future of the industry, but also to ensure that as much of the work as possible finds its way into Canadian plants and into our communities.

What autoworkers have accomplished at Ford is truly historic and among the largest auto sector investments seen in years. Joining a union and bargaining collectively has never been more important. It helps ensure that all possible solutions are put in place so that you arrive at work safe and return home safe to you family.

At a time of deep uncertainty, change, and unprecedented health and economic challenges, we urge you to review the new agreement with Ford that secures investments, jobs and brings significant improvements to wages, health and safety measures, and much more. These are all areas in which Toyota needs to be improved.

Unifor is here for TMMC team members to join a union that will bring the changes you need. We are always available to talk to you if you’re interested in more details and how team members at Toyota can join Canada’s union for autoworkers today.